The Inner Life of Krishnamurti - Private Passion and Perennial Wisdom (2000) 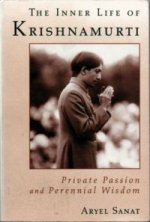 Theosophist Aryel Sanat sets out to show that K, while exhorting his audiences to become aware of their own conditioning, rather than follow a teacher or guru, never denied the existence of the Masters, and was fully aware of the overshadowing presence of the Lord Maitreya.
"One might say that Aryel Sanat goes on where Mary Lutyens felt she had reached the end of her tether," according to a review of this book.
Sanat's book documents that "the Masters and Lord Maitreya were realities to Krishnamurti, apparently every single day of his life since he first encountered them in his youth" (p.xiii). This is confirmed by Benjamin Creme, who says that Krishnamurti was almost constantly overshadowed by Maitreya. (Share International No.9, November 1998, p.22-23)
Aryel Sanat is the pseudonym of Miguel Angel Sanabria, Adjunct Professor in the Department of Philosophy and Religion at the American University in Washington, D.C.