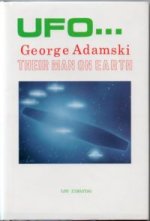 The main part of this book consists of a facsimile reproduction of the unedited 1978 manuscript for Zinsstag's first English-language book, George Adamski – The Untold Story (CETI Publications, 1983). The manuscript was heavily edited, reorganised and somewhat expanded for the actual publication in 1983. For instance, the reference to Adamski's teacher "connected to a group in Tibet" occurs here on the first page of Chapter I, while the reference to Desmond Leslie's book The Amazing Mr Lutterworth as being about Adamski and "75 per cent non-fiction" was not yet included in this version of the manuscript.
The second part of the book consists of 84 pages of facsimile reproductions of photographs, documents and letters supporting Adamski's claims, as well as some letters written by Adamski such as his correspondence with Emma Martinelli. Another reproduction of note is that of the final English-language issue of IGAP Denmark's UFO Contact (Spring 1980) by its founder, Major Hans C. Peterson, which he dedicated to the memory of George Adamski.

According to the Preface by the publisher, Wendelle C. Stevens (d.2010), Zinsstag's book was meant to set the record straight in favour of Adamski. The publisher also briefly refers to his meeting with Benjamin Creme, "a pupil of Lord Mitreya" (sic), in 1990 and which he related at length in his Preface to the English edition of Giorgio Dibitonto's book Angels in Starships (1990), to back up the claims of Adamski and Zinsstag (pp.6-7).
After his death on 7 September 2010 his books, which were all published in limited editions, continue to be sold in e-book format by his daughter.

Published in a limited edition of 1,000 copies.

The picture on the front cover is an artistic rendition of the photograph on the back cover, taken by Adamski through a telescope. The photograph shows a cigar-shaped mothership with scout ships coming out of its hull. The same photograph was used on the cover of the original edition of Adamski's Inside the Space Ships (1955).