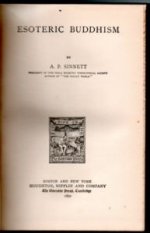 Rather than expounding the hidden teachings of Buddhism, this book presents some of the basic tenets of Theosophy. As H.P. Blavatsky explains in her Introduction to The Secret Doctrine (1888): "Esoteric Buddhism was an excellent work with a very unfortunate title..." She quotes an "eminent Pali scholar" who said that "there was in the volume named 'neither Esotericism nor Buddhism'. The esoteric truths, presented in Mr Sinnett's work, ceased to be esoteric from the moment they were made public; nor did the book contain the religion of Buddha, but simply a few tenets from a hitherto hidden teaching, which are now explained and supplemented by many more in the present volumes." (The Secret Doctrine, Adyar ed. Vol.I, p.41) 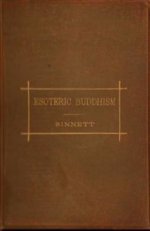