Blavatsky and Her Teachers - An Investigative Biography (1988) 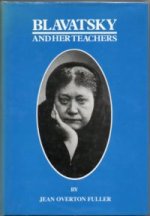 A solid biography of H.P. Blavatsky, which is referenced extensively in Sylvia Cranston's HPB - The Extraordinary Life and Influence of Helena Blavatsky.
This volume contains some interesting illustrations, among which the b/w reproduction of the colour sketch by the Master DK that is also featured in C.W. Leadbeater's The Masters and the Path, a self-portrait of the Master Morya, and a photograph of the monastery in Shigatse where "verses in an ancient and sacred language called Senzar ... were recited for [HPB] until she knew many of them by ear and the meanings by heart". (p.26) These HPB would later give to the world as the Stanzas of Dzyan. This is the same lamasery where Murdo MacDonald-Bayne and Rolf Alexander studied in 1936-37 and 1938, respectively. (Benjamin Creme, Share International No.10, December 2007, p.27)

Jean Overton Fuller (1915-2009) wrote several other books, as well as an essay about Cyril Scott and the people in his Initiate trilogy (for which, see the section Various Teachings > Others), Cyril Scott and a Hidden School: Towards the Peeling of an Onion (Theosophical History: Occasional Papers Vol.VII; ed. by James Santucci).

In 1991 Russian director Karina Dilanyan made a film about the life of H.P. Blavatsky and the teachings of Theosophy, entitled Who Are You, Madame Blavatsky?