The Ageless Wisdom Teaching - An introduction to humanity's spiritual legacy (1995) 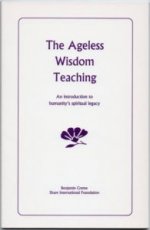 This book is a transcript of an interview with Benjamin Creme by Rollin Olson. The interview was also included in Maitreya's Mission, Vol.III (1997) as the introduction to Chapter 4.
First published as a brochure with background and contact information for Share International (shown below, featuring BC's painting "Aspiration"). The second edition, which had a dark burgondy cover, features excerpts from the article 'Infinity the goal' by BC's Master, as well as from Maitreya's Message No.13. This (unmarked) third edition instead features excerpts from the article by BC's Master 'The reordering of priorities' and Maitreya's Message No.81.

"[The] Ageless Wisdom teachings are the means by which humanity is kept informed of its essential divinity and of its journey of evolution toward perfection." (Benjamin Creme, Maitreya's Mission, Vol.III, p.347.)

Another interview with Benjamin Creme by Rollin Olson, on the emergence of the World Teacher, was published as part of the 3-part videotape, The Story that Won't Go Away (Share International, 1990), which also features a section on Transmission Meditation, as well as the documentary Crosses of Light by Frances Robinson. 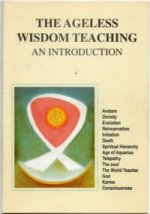