Selected Writings - An Introduction to Orgonomy (1960) 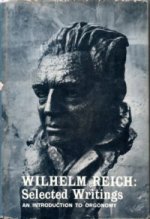 The pioneer work of Wilhelm Reich (1897-1957), a 2.0 degree initiate, "led him from the concept of the unitary basis of neurosis to the discovery of primordial energy..." (Benjamin Creme (1986), Maitreya's Mission, Vol.II, p.544)
What Reich called "orgone" is actually the scientific discovery of the etheric levels of matter, which substand dense physical matter. "The reality of this etheric energy, of what he called 'orgone energy', was demonstrated palpably by Wilhelm Reich in various simple experiments. Nevertheless, he was arrested because he used instruments which he called the 'orgone accumulator', boxes which accumulated the etheric energy of some levels, usually the two lower levels, the fourth and the third etheric, to treat diseases including cancer and various other diseases. In America that was deemed illegal. The Food and Drug Administration arrested him, refused to allow him to prove his work, and he died in prison." (BC in Share International No.6, July/August 2004, p.10-11)
Wilhelm Reich's work is also referenced in Benjamin Creme (1979), The Reappearance of the Christ and the Masters of Wisdom, p.12.

Reich also warned against the rise of fascism in the US in his book Listen, Little Man (1948) and he was a friend of A.S. Neill, a 1.7 degree initiate and founder of Summerhill School, which is based on the notion that children learn best in an environment free from coercion.

In 2002 a video about his life and work was made, titled Man's Right to Know.