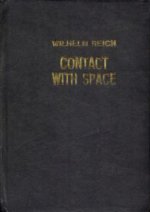 "We had learned in two parallel lines of observation that the white and black powdery substances, Orite and Melanor, were related to drought, dryness and discomfort in man, animal and vegetation alike. At the same time, a relationship was established between these atmospheric conditions and the presence of the big, yellow and reddish pulsating "stars" which we had learned to distinguish from planets and bluish fixed stars", writes Wilhelm Reich on p.23 in this report.
Reich, who around 1935 discovered the etheric planes of matter which he called "orgone" or the universal life energy (see his Selected Writings), suspected that the harmful substances were caused by the activity of flying saucers or UFOs and he and his team set out to find ways to neutralize the effects: "I made actual contact by way of the cloudbuster with luminous objects in the sky on May 12, 1954 ... During this hour men on earth saw for the first time in the history of man and his science two 'Stars' to the west fade out several times when cosmic energy was drawn from them." (pp.2-3)
"Easy contact was made on that fateful day with what obviously turned out to be a heretofore unknown type of UFO. I had hesitated for weeks to turn my cloudbuster pipes toward a 'star,' as if I had known that some of the blinking lights hanging in the sky were not planets or fixed stars but SPACE machines. With the fading out of the two 'stars,' the cloudbuster had suddenly changed into a SPACEGUN ... what had been left of the old world of human knowledge after the discovery of the OR energy 1936-1940 tumbled beyond retrieve... Nothing could any longer be considered 'impossible'. I had directed drawpipes, connected with the deep well toward an ordinary star, and the star had faded out four times... Three more people had seen it. There was only one conclusion: The thing we had drawn from was not a star. It was something else; a 'UFO'." (pp.4-5) (Another 'cloudbusting' technique is described by Rolf Alexander, who was told by Gen. Marshall about "friendly space visitors"; see link below.)
Benjamin Creme's information that the UFOs from space have been engaged in neutralizing, as much as possible, the debilitating effects of nuclear radiation on the etheric planes since the discovery of nuclear fission technology -- a view that was also held by George Adamski, Alberto Perego and others -- seems to indicate that, although his findings were correct, Reich mistook the presence of the UFOs and their mitigating work for the cause of the problem.

This hardcover edition is a high-quality facsimile of the 1985 softcover reprint. 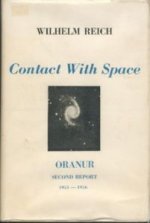