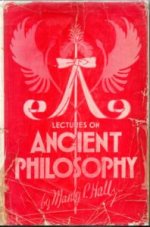 This volume is a companion to the author's seminal work, The Secret Teachings of All Ages. It is composed of the talks which he held in San Francisco and Los Angeles to groups of people who had subscribed to the latter work.

In an illuminating expose on the illusion of "the Sense of Diversity" (i.e. division, or separation) in Chapter Five, Mr Hall writes: "In the Tushita heaven of the Lamas dwells the radiant consciousness of Maitreya, the loving one, the desired of all nations -- the Buddhist Messiah who is yet to come. (...) Maitreya gives a definite key to the world-wide belief in a coming Savior whose advent will be marked by miracles and who shall lead his people to spiritual and temporal victory. Maitreya is the consciousness of hope..." (p.101)