After We Die, What Then? - Answers to Questions About Life After Death (1980) 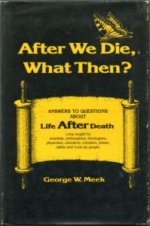 This is an earnest and thorough investigation into evidence of the continuation of life after the death of the physical body. George William Meek (d.1999) exhausts several of the scientific approaches of the topic and projects the possibility of electronic communication with the dead, which he would come to detail in his next book, The Magic of Living Forever.
This edition includes examples of "Typical early 19th-century spirit photography" and a large, full-colour foldout chart of "Interpenetrating Levels of Life and Consciousness", reminiscent of the diagram in the books by Alice A. Bailey of the seven planetary planes of existence -- from the dense-physical to the 'adamic,' the highest spiritual plane.

A new, expanded edition was published by Ariel Press in 1987.

Another book on this subject was written by Theosophist Howard Murphet, best known for his books about Sri Sathya Sai Baba, entitled Beyond Death: The Undiscover'd Country (Theosophical Publishing House, 1990).