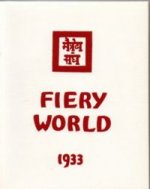 "Dreams about the future are widespread. Prophecies are disseminated by the thousands, and people in various countries are becoming accustomed to definite dates. In this way the course of evolution is being affirmed. So, too, the awesome dates are being called to mind. One might say that never before has humanity had to so cast its lot. It is impossible to violate free will more than is now being done. You yourself see how the dates are being brought to mind in the most unusual ways, but blind are those who do not wish to see. You yourself also see how difficult it is to establish a solemn unity, even as a salutary remedy. Yet you also see how a great many destructions may be mitigated. Where there would have been a blow, only a slight shock occurs. But do not rest in the belief of a secure existence. Everything is unstable; the Ladder of Hierarchy alone is firm." (p.164-65)
"Sometimes in the hour of danger the Teacher gives protection, taking the danger upon Himself. He covers, as it were, the massed darkness with His hands. At such times one must observe particular caution. A powerful tension is near. During this time it is best to feel a special gratitude to the Teacher." (p.211-12) 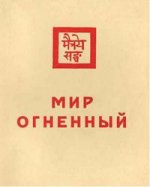