The Whole Movement of Life is Learning - J. Krishnamurti's letters to his schools (1981) 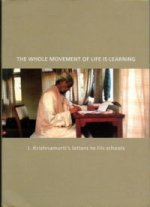 Compilation of the letters which Krishnamurti wrote to the staff and students of his schools in India, England and California, originally published in two volumes.
The original Volume one was published in 1981 and contained 37 letters written between September 1st, 1979 and March 1st, 1980. The original Volume two was published in 1985, with 18 letters that were written between November 15th, 1981 and November 15th, 1983. The current edition adds 17 letters written in 1968 and 1973.

"The insights in these letters will be valued by parents, educators, students of education, and others concerned about the failure of educational systems to nurture the full development of graduates with a deep sense of human worth and dignity, who may create a global society based on priorities beyond materialism." (Source: KFI website)

The image below shows the cover of the first edition of Letters to the Schools, Volume one (Mirananda, the Netherlands 1981). 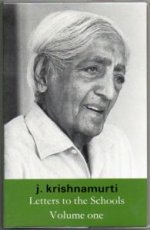