Things of the Mind - Dialogues with J.Krishnamurti (1985) 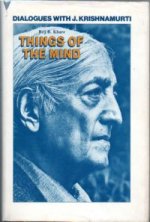 In March 1981 Prof Brij Khare, of the California State University, San Bernardino, organised a three-day conference on education where Krishnamurti discussed the meaning of education, the nature of knowledge and thought, the role of the teacher, and the relationship between what is, insight and right action. The conference, which was partially funded by a US government program, was attended by almost thirty professors, teachers and students and its four sessions were also videotaped. (Source: Michael Krohnen (1997), The Kitchen Chronicles -- 1001 Lunches with J. Krishnamurti.)

In 1988 a reprint was published by Motilal Banarsidass Publishers (India).