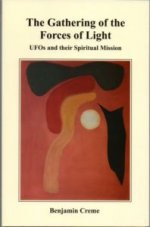 In this volume Benjamin Creme redresses much of the existing misinformation about UFOs, the Space Brothers, and Their mission, adding many new insights to what was previously made public (see the links below). While Part I starts with his 2009 keynote talk, 'UFOs -- Their Spiritual Mission', the topic of Part II is 'Education for the New Age', which was the 2008 keynote talk and also provides much information about the Science and Technology of Light, including the crop circles and the circles and patterns of light, that has been given since 2001.
This book also contains the information about the "star" sign that heralds Maitreya's emergence, that has been given since December 2008.

The author dedicated this book to George Adamski, "a very brave man and colleague."
The questions and answers about Adamski to which the author refers in a note on p.40 are included in this book on p.53 ff, while the article about George Adamski and the book review of Desmond Leslie's The Amazing Mr Lutterworth in Share International No.8, October 2008, referenced on the same page, formed the basis for parts of chapter 2 and 3, respectively, of George Adamski -- A Herald for the Space Brothers by Gerard Aartsen (2010).

This book is titled after an article by Benjamin Creme's Master in Share International No.2, March 2007, which predicted the spectacular increase in UFO sightings around the world in recent years.

The painting on the cover is 'Pluto routed' (2003). In Share International No.6, July/August 2010 (p.35), Benjamin Creme explains the esoteric significance of the painting, which "represents the eternal struggle that goes on in every solar system between planets at different stages of evolution."

More information about Benjamin Creme as a contactee appears in The Contactees Manuscript (1993) by Joseph Randazzo, which also features profiles of 11 other contactees, including George Adamski.