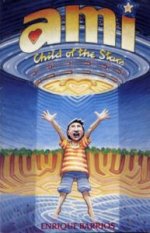 After he had an experience of a UFO in 1985, Chilean author Enrique Barrios wrote this inspiring and uplifting account, guised as a children's story about a young boy, Pete (Pedro, or Pedrito, in the original Spanish edition), who meets the extraterrestrial Ami (short for Amigo, or friend). The illustrations by Glen Strock were based on original sketches by the author.
Corroborating a statement in the second volume of Letters of Helena Roerich, Enrique Barrios writes, as his protagonist Pete: "...after we reached some buildings, we stopped in mid-air, and I almost fainted! There were people flying all around us! Suspended in the air with outstretched arms, they moved about effortlessly -- some vertically, others in a horizontal position. They had their eyes closed and a look of great sweetness and concentration on their faces. They soared in great circles." (p.97)
An undated, seemingly later, English edition includes the statement: "This book has been declared Complementary Didactic Material for the Chile Education, by Exempt Resolution 2275 on September 1st, 1986..." And "A Short Chronicle of A Literary Success", seems to suggest it was published by the original Chilean publisher, Errepar. However, it lacks an ISBN or other identifying publishing data. Instead of the illustrations by Glen Strock, this second English edition has a cover illustration similar to the original Spanish edition and what seem to be the original sketches by the author.
In December 2019 a new English edition was published by Sans Souci Books as Omi of the Stars.

This book has been translated into twelve languages, and is still in print in most of them, including Spanish.
Mr. Barrios wrote three sequels, which were also published in many languages, although the English translations have only appeared in PDF format. 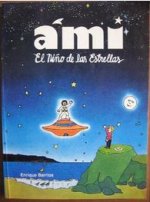