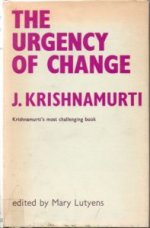 In this book, more than in his previous writings, Krishnamurti takes up the psychological problems of living peacefully in a violent world and "he has a particular appeal for the young of today who are revolting against the old values of a corrupt and competitive society," according to the text on the backflap.

In her biography The Life and Death of Krishnamurti editor Mary Lutyens recalls that the questions in this volume were put to K by former music lecturer and concert pianist Alain Naudé, who later became K's private secretary: "Alain would take down both questions and answers in his longhand, dictate them onto a tape recorder and read them back to K in the evening to make any corrections. This book, therefore, has a value beyond the books of edited talks wbhich K never revised or even looked at."