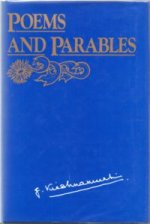 Collection of the poems that were first published separately in The Search (1927), The Immortal Friend (1928), and The Song of Life (1931), plus the parables and similes from The Path (1923).
This volume was first published in the US as From Darkness to Light (1980). It was meant to be the first of The Collected Works of Krishnamurti and was published by Harper & Row for the K&R [Krishnamurti & Rajagopal] Foundation. However, the series was never continued because Rajagopal refused to send the original works to Harper & Row, which he had been requested to do after it was found that he had changed some 300 words in the first manuscript for this edition, and that he had included material from before 1926 against K's wishes. (Source: KFA History, Chapter 2 & 3.) Between 1991-92 another series was published by the Krishnamurti Foundation of America and Kendall/Hunt Publishing as The Collected Works of J. Krishnamurti (17 vols), which was comprised of Krishnamurti's talks from 1933-1967, and does not include these poems and parables.
The frontispiece photograph in both the UK and US editions of this volume is the same as that on the cover of Mary Lutyen's Krishnamurti -- The Years of Awakening (1975).

The original US title of this book, From Darkness to Light, reflects a phrase from the mantram of the Disciples Degree, as quoted by the Master DK in Alice A. Bailey (1944), Discipleship in the New Age, Vol.I, p.306: "May the energy of the divine self inspire me and the light of the soul direct. May I be led from darkness to light, from the unreal to the real, from death to immortality." (emphasis added)
It also appears, in a slightly different form, before the Foreword in At the Feet of the Master (1910): "From the unreal lead me to the Real. From darkness lead me to Light. From death lead me to Immortality." This wording, which occurs almost identical at the beginning of Chapter XI of Swami Omananda (1959), The Boy and the Brothers (p.194), is taken from the Satapatha Brahmana (14:4:1:30-31), one of the Hindu sacred texts and the one which relates the Hindu version of the story of the Great Flood (1:8:1:1-6). 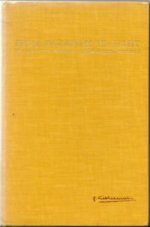