Krishnamurti to Himself - His Last Journal (1987) 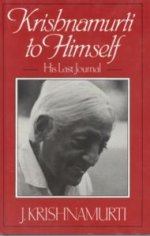 The third of three volumes of his personal writings.