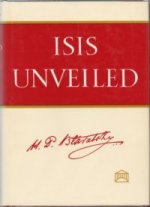 "One day in the Summer of 1875, H. P. B. showed me some sheets of manuscript which she had written, and said: 'I wrote this last night "by order," but what the deuce it is to be I don't know. Perhaps it is for a newspaper article, perhaps for a book, perhaps for nothing: anyhow, I did as I was ordered.' And she put it away in a drawer, and nothing more was said about it for some time." (Theosophical Society co-founder Henry Steel Olcott in Chapter XIII (p.202) of his Old Diary Leaves about how work on Isis Unveiled began.)
"The work of Madame Blavatsky -- who worked under her own Master, the Master Morya, and the Master Koot Hoomi (KH) -- was new to the world. She brought the idea of the Masters openly into the world in her writings ... and the talks which she gave. In this way the idea of the Masters was brought to humanity. It was the first step in the externalization of the work of the Hierarchy, which is now taking place." (Benjamin Creme, Share International No.3, April 2004, p.9)
Quoting the Master Koot Hoomi from one of the Mahatma Letters (see also A. Trevor Barker, The Mahatma Letters to A.P. Sinnett) Charles J. Ryan, in H.P. Blavatsky and the Theosophical Movement (1937), explains that Isis Unveiled was the Masters' first effort to "break the molds of mind" in preparation for the building of "a new continent of thought," and "to invite the elect of mankind to co-operate ... and help in his turn to enlighten superstitious man" (Mahatma Letter No.IX). In another letter the Master KH adds: " 'Isis' was not unveiled but rents sufficiently large were made to afford flitting glances to be completed by the student's own intuition. In this curry of quotations from various philosophic and esoteric truths purposely veiled, behold our doctrine, which is now being partially taught to Europeans for the first time." (Mahatma Letter No. XVIII, June 1882)

Mme Blavatsky (1831-1891) disapproved of both the title and the subtitle which the publisher, J.W. Bouton, who held the copyright, had chosen for this work after finding that HPB's first preference for the title, The Veil of Isis had already been used by another author (W. Winwood Reade, The Veil of Isis, or the Mystery of the Druids, 1861). The subtitle also does no justice to the more modest first choice of HPB's, and she wrote that she certainly did not claim that her book was "A Master-key..." to anything. (Sylvia Cranston, HPB, p.159-60.)

Two-volume set: Volume 1 - Science; Volume 2 - Theology. Vol.2 of this edition includes a 53-page Appendix featuring a Bibliographical Index, Author and Title Key, and two reprinted articles by HPB: 'Theories about Reincarnation and Spirits' (from The Path, Nov. 1886), and 'My Books' (from Lucifer, May 1891). 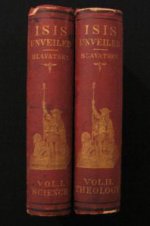