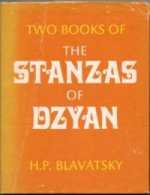 A compilation of the stanzas of Dzyan which form the skeleton of The Secret Doctrine, as 'paraphrased' by HPB from the original Senzar, "the mystery tongue of the Initiates.”
As HPB writes in the Proem to The Secret Doctrine: "The history of Cosmic Evolution, as traced in the Stanzas, is, so to say, the abstract algebraical formula of that evolution. Hence the student must not expect to find there an account of all the stages and transformations which intervene between the first beginnings of Universal Evolution and our present state. (...)
"The Stanzas, therefore, give an abstract formula which can be applied, mutatis mutandis, to all evolution: to that of our tiny Earth, to that of the Chain of Planets of which the Earth forms one, to the Solar Universe to which that Chain belongs, and so on, in an ascending scale, till the mind reels and is exhausted in the effort.
"The Seven Stanzas given in this (the first) volume represent the seven terms of this abstract formula. They refer to, and describe, the seven great stages of the evolutionary process, which are spoken of in the Puranas as the 'Seven Creations', and in the Bible as the 'Days' of Creation." (Adyar ed., Vol I, p.85)

"Dzyan", like "Zen", derives from Sanskrit "dhyana" or "gnani", which means meditation, discernment, and the annihilation that Zen Buddhists strive for is rather misunderstood, according to HPB. She says that "the term 'nihil' in the minds of the ancient philosophers had a meaning quite different from that it has now received at the hands of Materialists. (...) The 'Nihil' is in esse the Absolute Deity itself, the hidden Power or Omnipresence degraded by Monotheism into an anthropomorphic Being, with all the passions of a mortal on a grand scale. Union with That is not annihilation in the sense understood in Europe." In a note she adds: "According to the Eastern idea, the All comes out from the One, and returns to it again. Absolute annihilation is simply unthinkable." (Adyar ed. Vol.5, pp.386-87)

The Book of Dzyan is the first volume of Commentaries on the "seven secret folios of Kiu-te, and a Glossary of the public works of the same name." There are 35 volumes of Kiu-te for exoteric purposes, which HPB calls " 'The Popularized Version', full of myths, blinds and errors" while the 14 volumes of the Old Commentary, "worked out from one small archaic folio, the Book of the Secret Wisdom of the World -- contains a digest of all the Occult Sciences." (Adyar ed. Vol.5, p.389). It is said that these 14 volumes are in the charge of the Teshu Lama of Shigatze.
The Master DK gave further stanzas from the Old Commentary in the Alice A. Bailey books. 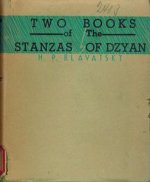