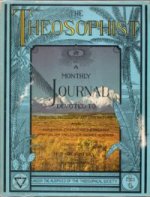 A "Centennial Reissue" (2000 copies) of the first volume of The Theosophist, with Index. The first issue was published in October 1879. With a short report entitled "Food for the Starving" in its first issue, and recurring reports of spiritualist incidents in various countries, this first of many Theosophical journals rings like a precursor of Share International magazine, with its unique mix of articles about socio-economic justice and reports and letters from readers about miraculous occurrences and appearances of Maitreya or the Masters.

The first issue of The Theosophist, of which 400 copies were printed, was sent out on 1 October 1879. Three days later Col. Olcott received a letter from the Master Serapis which said: "Whenever convenient explain that the paper is neither your nor H.P.B.'s but belongs to and is under the control of certain persons no one knows anything about except your two selves." (Letters from the Masters of Wisdom, 2nd Series, Letter No.29)
At the end of the month there were 381 registered subscribers, and it was decided to print 750 copies for the November issue.

Two "miraculous occurrences," reported over a century apart, one from November 1879 and the other from July 1985, seem indicative of how human consciousness has expanded since the ideas coming from Hierarchy were first made public through the books of H.P. Blavatsky in the 19th century:
In the July 1880 issue of The Theosophist (p.245 in this reissue), HPB's sister Vera Zelihovski recounts the story of a widow in her hometown, Tiflis, whose son had been accidentally killed in an incident at a local inn. The perpetrators had hidden the body in a stack of hay, but before they could dispose of it the following night the ghost of the young man, or the "astral double", had guided his mother to the place where his physical body was hidden. This story clearly shows that in the late 19th century "the Western world was still trying to grapple with the idea of 'survival' after death as introduced by the Spiritualist Movement." (Benjamin Creme (1986), Maitreya's Mission, Vol.I, p.302.)
In its March 1986 issue Share International (p.20) reports how six Soviet cosmonauts witnessed the most awe-inspiring spectacle ever encountered in space -- a band of glowing angels with wings as big as jumbo jets, their faces round with cherubic smiles -- during their 155th day aboard the orbiting Salyut 7 space station in July 1985. Later the figures were also seen by three other Soviet scientists, including woman cosmonaut Svetlana Savitskaya. "They were smiling," she said, "as though they shared in a glorious secret." Benjamin Creme's Master explained that what the astronauts saw was a vision in astral matter projected by the Master Jesus. Its purpose was to bring to their minds the idea of higher worlds and meaning and to somewhat prepare them for Maitreya's presence.

That sharing and justice were at the heart of HPB's brand of Theosophy, is unambiguously clear in this quotation from the article 'The Dual Aspect of Wisdom' by HPB from Lucifer, the Theosophical journal that was first published in London in September 1887. In it HPB denounces claims that Theosophists prefer "barbarous antiquity to our modern civilization and its inestimable boons": "Our age, we say, is inferior in wisdom to any other, because it professes, more visibly every day, contempt for truth and justice, without which there can be no wisdom. Because our civilization, built up of shams and appearances, is at best like a beautiful green morass, a bog, spread over a deadly quagmire. Because this century of culture and worship of matter, while offering prizes and premiums for every 'best thing' under the sun, from the biggest baby and the largest orchid down to the strongest pugilist and the fattest pig, has no encouragement to offer to morality, no prize to give for any moral virtue... Because, finally, this is the age which, although proclaimed as one of physical and moral freedom, is in truth the age of the most ferocious moral and mental slavery, the like of which was never known before. ... Rapid civilization, adapted to the needs of the higher and middle classes, has doomed by contrast to only greater wretchedness the starving masses." (Vol. VII, Sept. 15, 1890; the article was later republished in the compilation volume Studies in Occultism, 1946.) 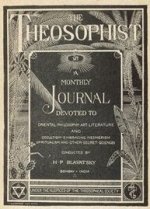