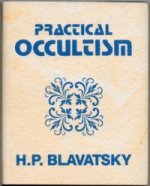 Compilation of three articles: 'Practical Occultism', 'Occultism vs the Occult Arts', and 'Some Practical Suggestion for Daily Life'.

"Occult simply means hidden, and specifically the hidden knowledge or science of the energies behind the evolutionary process. Esotericism might be seen more as the philosophy of the evolutionary process, and occultism as the science of the energies which bring this process about." (Benjamin Creme (1996), The Ageless Wisdom Teaching, p.5)
"The Occult Science is not one, in which secrets can be communicated of a sudden, by a written or even verbal communication. If so, all the 'Brothers' should have to do, would be to publish a Hand-book of the art which might be taught in schools as grammar is. It is the common mistake of people that we willingly wrap ourselves and our powers in mystery -- that we wish to keep our knowledge to ourselves, and of our own will refuse ... to communicate it. The truth is that till the neophyte attains to the condition necessary for that degree of Illumination to which, and for which, he is entitled and fitted, most if not all of the Secrets are incommunicable. The receptivity must be equal to the desire to instruct. The illumination must come from within." (The Master Koot Hoomi, in Mahatma Letter No. XLIX, August 5, 1881; see A. Trevor Barker, The Mahatma Letters to A.P. Sinnett.)

The first two articles in this book were first published in Lucifer magazine in April and May 1888, and published as a separate brochure in the same year. The first edition that also included the third article appeared in 1948.