The Secret Doctrine - The Synthesis of Science, Religion and Philosophy (Adyar Ed.) (1888) 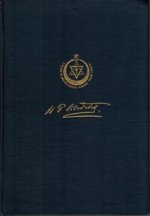 In The Secret Doctrine HPB releases, for the first time in modern history, the hitherto esoteric teaching of the Masters of Wisdom about the evolution of cosmos (Vol.I) and the evolution of man (Vol.II) to the Western world.
"One turn of the key, and no more, was given in Isis Unveiled. Much more is explained in these volumes. ... In century the twentieth, some disciple more informed, and far better fitted, may be sent by the Masters of Wisdom to give final and irrefutable proofs that ... the source of all religions and philosophies now made known to the world has been for many ages forgotten and lost to men, but it is at last found. ... The Secret Doctrine ... contains all that can be given out to the world in this [the 19th] century." (p.60)
"The broad general outline and scope of The Secret Doctrine was conveyed verbally to HPB by the Masters Koot Hoomi and Morya, while the bulk, the esoteric lore, was given to her telepathically by Djwhal Khul. She herself gave the correspondences between the esoteric science and the exoteric science of her day. It was in fact a group work." (Benjamin Creme, Maitreya's Mission, Vol.I, p.301-02.)

This edition is a reprint of the commemorative Adyar edition (1938) in six volumes, with vols 1 and 2 containing the original Vol.I, Cosmogenesis, vols 3 and 4 containing the original Vol.II, Anthropogenesis, vol.5 containing Vol.III as it was published in 1897 from a collection of papers which HPB left to Annie Besant -- and disputed by some Theosophists, while vol.6 consists of an extensive index of over 55,000 entries, as well as a book index and a glossary.
Vol.1 of this edition also includes a biographical sketch of HPB and the story of how The Secret Doctrine was written, both by Josephine Ransom, who explains (on p.28) that it was to consist of four volumes: 1-The Evolution of Cosmos, 2-The Evolution of Man, 3-The Lives of Some Great Occultists, and 4-Practical Occultism. Each volume would be divided into three parts: (a) Stanzas and Commentaries, (b) Symbolism and (c) Science.
In her Introductory HPB says in Vol.III "a brief recapitulation will be made of all the principal adepts known to history, and the downfall of the mysteries will be described; after which began the disappearance and final and systematic elimination from the memory of men of the real nature of initiation and the Sacred Science. From that time its teachings became Occult, and Magic sailed but too often under the venerable but frequently misleading name of Hermetic philosophy." (SD, pp.61-62)

The second cover shown here is that of Volume 1 of the 1st UK edition, as it was published in London on 20 October 1888, bound in grey, in a print run of 500 copies. The second volume did not come out until early January 1889. 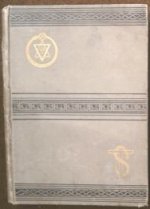