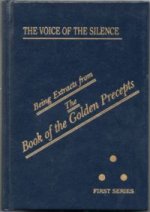 The last book that H.P. Blavatsky wrote before her death in 1891, while "taking a rest" in France, was dictated to her by the Master Djwhal Khul. It consists of three treatises, 'The Voice of the Silence', 'The Two Paths' and 'The Seven Portals'. These are fragments from the same series of books that the 'Stanzas of Dzyan' were taken from, which form the basis of The Secret Doctrine:

"The work from which I here translate forms part of the same series as that from which the stanzas of 'The Book of Dzyan' were taken. Together with the great mystic work called 'Paramartha', 'The Book of the Golden Precepts' claims the same origin.
"The original Precepts are engraved on thin oblong squares. They are written variously, sometimes in Tibetan but mostly in ideographs. The ancient language of the priesthood, Senzar (language of the Sun, or ancient Sanskrit), besides having an alphabet of its own, may be rendered in several modes of writing in cypher characters." (pp.vi-vii)

Includes an introduction which details the circumstances under which the text was written.

According to Benjamin Creme, HPB has incarnated again in 1983, in a male body, in St Petersburg (then Leningrad). He will take the fifth initiation (and so become a Master) in this life (Benjamin Creme, Maitreya's Mission, Vol.II, p.550).
In a previous life she was Count Cagliostro (1743-1795), a friend and pupil of the Master Rackoczi in His manifestation as the Count of St Germain (Share International Jan./Feb. 1991, p.25, and Maitreya's Mission, Vol.II, p.337). 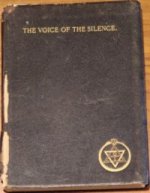