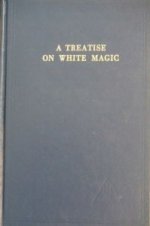 "...fear is the dominant astral energy at this time and sensitive humanity succumbs all too easily to it." (p.298)

Before this book appeared it was, through a mistake of Alice A. Bailey's, who forgot to delete a line in the instructions she sent to the disciples in her group, that more information became available about the identity of 'the Tibetan.' This prompted the Master DK to make the statement that would henceforth appear in each of His books.

This is the volume in which the Master DK, on p.296, recommends Bhagavan Das' The Science of Emotions (1900).