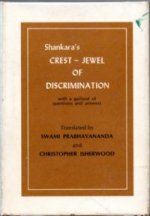 In Alice A. Bailey's The Reappearance of the Christ the Master DK writes: “Between the times of these two great Teachers, the Buddha and the Christ, lesser teachers appeared to amplify and add to the already given basic truths; of these Sankaracharya was one of the most important, giving, as He did, deep instruction upon the nature of the Self.” (p.107)
In his book A Search in Secret India Paul Brunton describes a meeting with the 66th successor of Sankara and is told how “the first Shankara promised his disciples that he would still abide with them in spirit, and that he would accomplish this by the mysterious process of 'overshadowing' his successors.” (Brunton, p.124)
This book gives a new translation by Swami Prabhavananda (in co-operation with Christopher Isherwood) of the teachings of Shankaracharya (Shankara, the Teacher) -- which are commentaries on the Hindu spiritual treatises known as the Upanishads, which in turn form the latter part of the Vedas, the holy scriptures of India.
The author is the founder of the Vedanta Society of Southern California and was also involved in the independence movement in India.

“Maitreya also taught through Krishna and Shankaracharya at previous times.” (Benjamin Creme (1996), The Ageless Wisdom Teaching, p.31). “[T]here are many people in incarnation now who worked with the Christ before in Palestine or in India when He appeared as Shankaracharya and Krishna.” (Share International, November 1982, p.8)