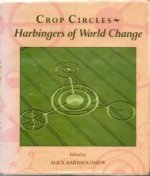 This early book about the crop circle phenomenon is a collection of 14 essays by as many contributors, among whom publisher and editor of this volume Alick Bartholomew (d.2015); Busty Taylor, whose work was also featured in Colin Andrews and Pat Delgado's Circular Evidence; Michael Green, who took the initiative for the founding of the Centre for Crop Circle Studies in 1990; George Wingfield, one of the founding members of the Centre for Crop Circle Studies; and Lucy Pringle, who would later publish such books as Crop Circles: The Greatest Mystery of Modern Times (1999) and Crop Cirles: Art in the Landscape (2007).

In his Introduction, in which he also references the work of biologist Rupert Sheldrake, Alick Bartholomew poignantly writes that "public confidence in our political and economic institutions is rapidly failing, as the hollowness and hypocrisy of 'the system' is exposed. We don't need to look for scapegoats; our leaders don't seem to be aware of what is happening, but we get the leaders we deserve, so it is we who have to change. It is just that we have lost our way, as 'the elder brother' is trying to say." (p.13)
He also says that the crop circle phenomenon "is accelerating a social and spiritual change that has been taking place over a number of years". And, making the connection with the extraterrestrial presence on Earth: "Beings from other parts of our universe may be concerned that we do not destroy our planet (there is an ecological inter-dependence also in the Universe!), working with the devic energies at the level of Nature, the collective unconscious may have an undreamed-of wisdom, while God (the Great Spirit) suffuses all of existence with meaning and balance." (p.15) In the latter part of this quote the author references Alice A. Bailey's first book, Initiation, Human and Solar.
In chapter 8, 'The language of the circle-makers', archeologist Michael Green builds on the connection between the UFO and the crop circle phenomena, describing a UFO sighting accompanied by a psychic experience in Rio de Janeiro in 1988 and makes a connection with ancient or lost civilizations. He makes various references to the books by H.P. Blavatsky and Alice A. Bailey. He opens his essay with a quotation from the Master Djwhal Khul, and concludes it thus: "This process constitutes, I believe, the formal beginning of the New Age, or 'Second Coming' in Christian parlance. The crop formations are the visible sign to humanity that the Kingdom of God is upon us." (p.142)

According to the information on his website, Alick Bartholomew has always been focused on discovering "something of the purpose of life on Earth" and his writings now center around the ecological crisis in the world and the significance of water, in which he also refers to the work of Masaru Emoto.