In chapter 1 the author describes how US radio journalist Bryce Bond and UK flying saucer buff Arthur Shuttlewood witnessed the birth of the modern crop circle phenomenon on 15 August 1972. As they both saw a triangular-shaped flying object on Star Hill, near Warminster, Wiltshire, UK, Mr Bond says: "Suddenly, I heard a noise. It seemed as if something pushed down the wheat. (...) In front of my eyes, I could see a great imprint taking shape. The wheat was forced down in a clockwise direction." (p.7)
This book is the first to establish a firm link between the UFO and crop circles phenomena and presents evidence that extraterrestrials are involved in the creation of the crop circles. According to the author, they are using the extraordinary patterns to inform humanity of their existence: "No wonder governments have been so keen to support the hoaxers and hush up the reality of the cosmic connection." In this respect, this volume is of definite value, even though the author seems to disregard the esoteric history of humanity as re-introduced through H.P. Blavatsky and A.A. Bailey, instead relying largely on the popular interpretation of Sumerian clay tablets for his understanding of the connection between the ET presence and the evolution of the human kingdom.
It also documents the results of laboratory experiments which have shown the presence of radioactivity in soil samples and chemical changes in the stalks of crops taken after the appearance of the circles.
For the interpretations of some of the symbols depicted in the crop circles, the author references the work of former chairman and co-founder of the Centre for Crop Circle Studies (CCCS) Michael Green, who in turn refers in one instance to Alice A. Bailey's Esoteric Astrology (on p.129).

This volume contains a collection of crop circle photographs from Britain, Siberia, Argentina and Saskatchewan, which the author connects with UFO sightings around the same time and in the same location, based on eyewitness accounts, as well as a section of impressive photographs of UFOs from around the world.

Michael Hesemann was the editor of the German Magazin 2000, from 1984-2000, and is the author of many books about UFOs and other 'paranormal' phenomena. He also directed several documentaries, such as for instance UFOs: The Contacts - Pioneers of Space (1996), in which he interviewed George Adamski's co-author Desmond Leslie and contactee Howard Menger. His interviews with leading researchers of the crop circle phenomenon for this book were also published as a three-part video series, The Mystery of the Crop Circles, one of the earliest video documentaries on the subject. 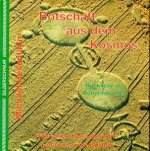