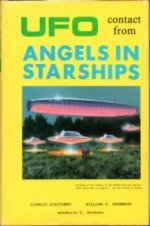 In visions Giorgio Dibitonto was contacted by a Space Brother called Raphael, in 1980, who led him to a wooded area in the Ligurian hills where they eventually met in person. Raphael introduces the author to the same Space Brothers who were described by George Adamski in his book Inside the Space Ships: the Venusians Orthon and Kalna, the Martians Firkon and Ilmuth, and the Saturnian Zuhl.
The author also meets a Space Brother named George who, according to Raphael, "lived for a while on Earth, where he chose to come on an assignment. Now he has returned to us." Benjamin Creme has confirmed that this Brother was the same being who lived on Earth as George Adamski and that the author's experiences were real, but took place out of the body (see Share International No.8, October 2008, p.9). Raphael further explains that he himself was referred to by Adamski as the Saturnian Ramu. (p.30)
In a sequence of remarkable events, the author is informed of the mission of the Space Brothers to help Earth humanity in overcoming our separativeness and competition if the planet is to survive, and is asked to inform the world of his contacts and experiences. He learns that the Space Brothers are now here in greater number and visibility to assist the planet in the transformation surrounding, and resulting from, the Second Coming. In reference to the Hebrews being led out of Egypt by Moses, Kalna tells the author: "You will be led by a new Moses whom we all love and admire greatly. He will lead all the people on this new exodus, like a good brother or father." (p.33)

In his Preface, the publisher, former USAF pilot Wendelle C. Stevens, quotes Benjamin Creme at length about his views on the authenticity of George Adamski's experiences: "On our return to London the end of May [1990] we met with Benjamin Creme, who says he is a desciple of Lord Mitreya [sic], one of the mystic masters of the Far East described in the Theosophical literature of the early 1900s, who, surprisingly added several more pieces to the puzzle. Mr. Creme told us that George Adamski was a pupil of one of his masters, and that he met Adamski, a second degree initiate, in his 'light-body', before George Adamski came to world attention as a UFO contactee. (...)
"To a question about Adamski's contactors saying they came from Venus, Mr. Creme readily replied that such was really true. In fact he added the information that there were many Venusians among us then, and even today, and that George Adamski was a Venusian spirit who had taken incarnation here for a very specific purpose, which he had fulfilled before leaving this realm in death of the physical body."
A photograph of Wendelle Stevens' meeting with Benjamin Creme appears in The Contactees Manuscript (1993) by Joseph Randazzo, on p.103.

The chapter about George Adamski from Eileen Buckle's book The Scoriton Mystery -- Did Adamski Return?, which relates an encounter of the third kind with a Space Brother who called himself something that sounded like "Yamski" in Scoriton, Devon, UK, one day after George Adamski died, is reproduced in full in this book as Appendix I.

Published in a limited edition of 1,000 copies. The English translation was first made available, in an unknown format, by William Sherwood of the Rochester UFO Study Group (no date [1984?], Rochester, NY, USA). 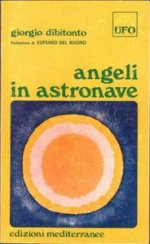