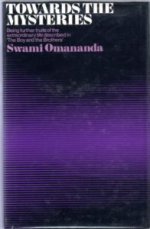 "To get people to answer their own questions is the only true way of teaching." (p.95)

A first collection of the teachings given by the Masters who worked through The Boy, interspersed with details from the lives of The Boy and Swami. Unfortunately, this would also be the last volume of teachings through The Boy because of Swami's death in June 1967. Swami Omananda was a 1.75 degree initiate.

Many gems of wit and wisdom can be found in this volume, such as: "What is the main difference between the human kingdom and the rest of Nature?" When no-one knew the answer, the Master replied: "It is the ability to complain." (p.103)
And in response to a visitor's remark, one of the Masters, through the Boy, says: "Should! SHOULD! Do you want a definition of 'should'? 'You can, but you won't'." (p.93)