Second, enlarged edition of the book that describes the extraordinary life story of a boy from the London slums (a 4.0 degree initiate) who was used by the Masters as a vehicle for giving healings and teachings. His is the only known case in which the Masters used trance mediumship, rather than mental overshadowing, which is Their usual method. (Benjamin Creme (1979), The Reappearance of the Christ and the Masters of Wisdom, p.107.)
In the original edition, in Chapter XII, 'Matters of Life and Death', the author describes many occasions where the Masters intervened to heal people or assist in their passing away. She also refers to Sri Sainath of Shirdi, the first of the Sai Avatar incarnations, on two occasions. In this second, enlarged edition this chapter has been replaced with two separate chapters, namely Chapter XII, 'Appearances-I' and Chapter XIII, 'Appearances-II', in which Swamiji instead describes many examples of how Masters working with and through the Boy would appear, and where the Boy was first contacted by the Masters -- as a boy in his own sanctuary tree in Epping Forest.

Swami Omananda Puri is the nom de plume of Maud MacCarthy (1880?-1967). She was the second wife of composer John Foulds (1880-1939), and the first woman to be ordained in the order of Sri Sankaracharya sanyassins in 2000 years. She was an established violinist and singer in her own right, and at the time she was one of the Western world's leading authorities on Indian music. She had also written a book under her own name, The Temple of Labour: Four Lectures on the Plan Beautiful in Relation to Modern Industrialism (Theosophical Publishing House, 1926).
Having adopted the Boy, the Swami was careful not to identify him by name anywhere in her books, "to save his soul from defamation." After the death of her husband, around 1943, she even married the Boy, who was 20 years her junior, to prevent misgivings or gossip in the British community in India where they were living. However, a posting on a genealogy website discussing details of Foulds and MacCarthy (Jan. 2006) names a William Coote (d.1956) as the "intriguing individual from London's East End that was taken under the wing of the Foulds and with whom he travelled to India in the 1930's". Also, on its page about John Foulds (Oct. 1996; see link) the German website Musikproduktion describes his wife as being "under the influence of the medium William Coote, named 'The Boy'."

Includes several plates of the Boy displaying different physical features as he is overshadowed by different Masters (not included in the first US edition as published by Doubleday in 1960). This fact is also discussed in Ian Stevenson, M.D. (1966), Twenty Cases Suggestive of Reincarnation, p.328.
Interestingly, this book is also referenced in Eileen Buckle (1967), The Scoriton Mystery - Did Adamski Return? on p.238. 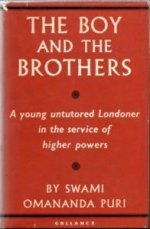