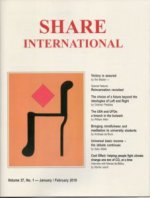 When Benjamin Creme's information about the Reappearance of the World Teacher spread abroad in the early 1980s, notably in the US, the need arose for a regular channel through which to pass on the latest information about Maitreya's emergence to the groups that were springing up everywhere, as well as interested individuals. Therefore, it was decided to publish a monthly magazine, as the Dutch group had been doing since October 1979. The first issue of Share International, under the editorship of Benjamin Creme and Peter Liefhebber, a Dutch newspaper journalist who was involved in the Dutch group's publicity efforts, was published by the Dutch foundation in January 1982.
Meanwhile Share International Foundation (London, Los Angeles, Amsterdam) was being established, which has been publishing the magazine since the May 1982 issue. Mr Liefhebber continued to be co-editor until 1999, at which time Felicity Eliot took over. Benjamin Creme's contributions to the magazine in the form of transcripts of his keynote talks at the annual Transmission Meditation Conferences in the Netherlands (since 1984), the US and Japan, as well as his monthly installments of answers to readers' questions, formed the basis for his books, which have since been published by the eponymous foundation.
From its inception SI has been unique not only in its mix of articles about socio-economic justice and reports about spiritual changes in the world, but even more so for the monthly article written especially for the magazine by one of the Masters of Wisdom. In addition, it regularly features contributions by world leaders in the field of politics, science and social transformation, agreeing to be interviewed or to have one of their articles (re-)published, among whom Mikhail Gorbachev, Nelson Mandela, Graca Machel, Robert Muller, Sri Chinmoy, Gro Harlem Brundtland, Mary Robinson, Mohammed Yunus, and many others.

Share International magazine is now [2018] in its 37th year.

The cover above is that of Volume 37, No.1 (January/February 2018) and features Benjamin Creme's painting Maitreya's Throne. The cover below is that of the zero issue (dated December 1981), announcing the first issue. 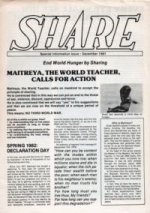