Alien Base - Earth's Encounters with Extraterrestrials (1998) 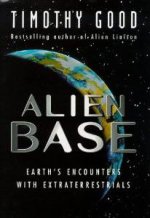 Timothy Good's third book about the extraterrestrial presence on Earth and the accompanying cover-ups contains two chapters in which he takes a closer look at George Adamski and his claims, namely chapter 6, "The Space People", and chapter 7, "Claims, Contradictions and Corroborations".
Rightly pointing out the significance of the fact that Adamski's was the first contact story to be published, and that claims of contacts that happened before him were not published until the mid-1950s, Good is the first modern UFO researcher to take Adamski seriously. (There are, in fact, researchers who privately do accept Adamski's claims, but who refrain from saying so publicly for fear of being ridiculed.)
After showing, through his research, that many of Adamski's claims cannot be dismissed, Good concludes: "Apart from my own prejudices, I feel it is important to re-emphasize that a great deal of what Adamski spoke and wrote about the 'space people' and their technologies is now, on the verge of the twenty-first century, more plausible and more scientifically relevant than it was some 40 years ago." (p.155)

This is also the volume in which Tim Good quotes from the English translation of a 1963 interview with Bruno Ghibaudi (on pp.215-17), the Italian journalist who was a participant in the Friendship Case, before the significance and the scale of that case became known through Stefano Breccia's book Mass Contacts (2009).
He also mentions Dr Rolf Alexander, who was present at a conversation where US Army General George Marshall (of Marshall Plan fame) "revealed that American authorities had recovered alien craft and bodies." (p.84)