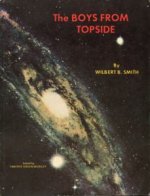 The original 1969 edition of a compilation of 11 articles which Canadian engineer, leader of Project Magnet, UFO researcher and contactee Wilbert B. Smith wrote for Topside, the publication of the Ottawa New Sciences Club which he founded. Many of the articles were first reprinted in Flying Saucer Review from the late 1950s onward. (The name Topside derived from Smith's favourite nickname for the space people -- "the boys topside", a maritime term denoting the personnel on deck.)
In the article 'The Philosophy of the Saucers' (chapter 4) Mr Smith seems to allude to the dawning of the New Age when he writes: "In time, when certain events have transpired, and we are so oriented that we can accept these people from elsewhere, they will meet us freely on common ground of mutual understanding and trust. We will be able to learn from them and bring about the Golden Age all men everywhere desire deep within their hearts." (p.29)
This volume has an introduction by George Hunt Williamson, best known as the author of Other Tongues, Other Flesh, a note about the author by the compiler, Timothy Green Beckley, and a foreword by the editors of Topside, titled 'The Space Brothers' Philosophy - and Wilbert B. Smith'. Appended are several related articles by other Topside contributors and/or from other publications.

A reprint was published in 1996 as The Boys From Topside: The Life of New Age Futurist Wilbert Smith by Inner Light/Global Communications, with a different cover. In 2017 another reprint was published, including a reprint of John B. Musgraves' UFO Occupants and Critters (Global Communications, Amherst, WI, 1979), as Project Magnet - The Lights in the Sky Are Not Stars.