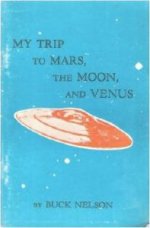 Buck Nelson (b.1895) was first contacted 30 July 1954, during which contact he had a healing experience. He was invited aboard a craft on his fifth contact, 24 April 1955 for visits to the moon, Mars and Venus, from which he returned on 27 April 1955. Benjamin Creme's Master has confirmed that Buck Nelson was contacted by the Space Brothers (Share International magazine No.6, July/August 2014, p.28).
Like several other early contactees Mr Nelson, a farmer and saw mill owner, was of humble descent and had not enjoyed much formal education. That this has no bearing on his moral standards is reflected in his appreciation of the simplicity of life on other planets: "Some of our commonly used methods of making a living would be absolutely unacceptable to them. One of these methods is our practice of making money from money in so many different ways." (p.16)

Buck Nelson first wrote of his sightings and contacts to the Springfield Missouri newspaper. This report was picked up by one James L. Hill of Seymour, Missouri, who mailed it to the Flying Saucer Clubs in the eastern USA. The publication of Mr Nelson's story was subsequently made possible by the Grand Rapids Flying Saucer Club.
In his 'Word about the Author' Mr Nelson writes: “… also George Adamski has done much to help me, and he tells the world he believes my story.”