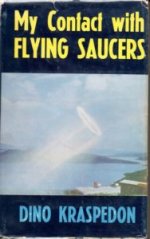 In November 1952, around the same time George Adamski had his first contact with a man from space, Dino Kraspedon (pseud. for Aladino Félix) had a very similar experience in Brazil and was asked to bring a very similar message to the world. Benjamin Creme's Master has confirmed that "Dino Kraspedon was contacted by the Space Brothers and that his account was authentic, more or less" (Share International magazine No.6, July/August 2014, p.28).
From Kraspedon's book: "I am surprised that scientists of Earth should continue to put their trust in their false science, in spite of all its errors they have so far been unable to rectify, and to deny the supreme science which is God. They are like glow-worms enamoured of their own light, crying out to other glow-worms, The Sun does not exist; the light in my tail is the only light there is" -Captain of the Flying Saucer

The cover shows a photograph taken by a Mrs Barrett of Great Barrington, Mass., USA, of a Norwegian fjord while on a cruise in July 1957, that was first published (in black and white) in Flying Saucer Review Vol.4, No.6, November-December 1958. According to the accompanying text, Mrs Barrett didn't see "the saucer, flying on its edge with a terrific beam of light emanating from it." It only appeared when the photograph was developed and printed.

First English edition published by Neville Spearman, 1959. It seems the original Portuguese edition was first self-published in a print run of 30 copies in 1957. 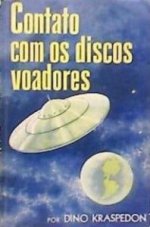