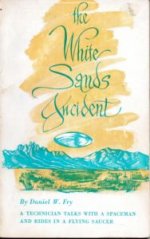 Contactee Daniel Fry (1908-1992) was contacted by the crew of a flying saucer on July 4th, 1950, who invited him on board and took him for a ride from California to New York and back. The information that was imparted to him during his experience corroborates George Adamski and others' assertions that the space people are here to help:
"The political tensions which now exist between your nations must be eased. If either of the two dominant nations of earth were to achieve conclusive scientific superiority over the other, under present conditions, a war of extermination would be certain to follow. We are not here to assist any nation in making war but to stimulate a degree of progress which will eliminate the reasons for war on Earth, even as we, some thousands of years ago eliminated the reasons for conflict among our own people." (p.30)
Benjamin Creme's Master has confirmed that Mr Fry was indeed contacted by the Space Brothers, "but did not ride in the spaceship" (Share International magazine No 6, July/August 2014, p.28).

This book was later combined with the author's second book, Alan's Message: To Men of Earth (1954) as The White Sands Incident and "To Men of Earth": A Technician Talks With A Spaceman And Rides In A Flying Saucer (1960). The combined edition was republished first in 1966 (Best Books Inc.) and again in 1973 as To Men of Earth (Merlin Publishing), in which The White Sands Incident part was revised. These also include chapters on "How Do They Communicate with Us from Outer Space" and "Logical Answers to the Many Questions About U.F.O.'s".

The White Sands Incident was also used in Gavin Gibbon's They Rode in Space Ships (Neville Spearman, 1957), re-published in paperback as Amazing Adventures of Two Americans On Board the Flying Saucers (1967).