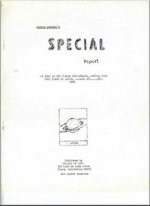 Originally released in two installments (5 and 4 US Letter-size pages), this report's full title is George Adamski's Special Report: My Trip to the Twelve Counsellors Meeting That Took Place on Saturn -- March 27-30, 1962. It describes Adamski's trip to Saturn where he attended the interplanetary Twelve Counsellors Meeting that took place on 29 and 30 March 1962. The conference addressed, among other things, the threat of nuclear war on Earth as the standoff between the USA and the Soviet Union over Cuba intensified: “…the present explosions of atomic energy are going in the wrong direction, and if these experiments do not stop, the only results will be a lost civilization… This is even affecting their planets…” (p.3)
The report starts with a description of the planet Saturn: "...all is so beautiful it is beyond description in earthly terms. (...) I had a camera with me and took some pictures but upon developing the film here I found the negatives were ruined and blank. Even the camera does not work as it used to, what had happened to it I do not know. Possibly the force field of the ship fogged the film." (p.1)

Although ridiculed by many, some of Adamski’s descriptions in Part 2 of the Report clearly show this was a deeply spiritual experience for him: "While we on the inside of the ship remained as normal as you are when reading this, our physical bodies experienced a sensation of lightness and a feeling that was indescribable -- of eternal well being. There was no awareness of distance away from the earth or strangeness and my mind gave me the sensation of being cared for by delicate hands. Yet I was fully aware of a change taking place within my body and was later informed that the molecules of my body caused the feeling of oneness."
While this report caused many Adamski supporters to dissociate themselves from him, 21st-century quantum philosophy, integral theory, and systems science are now expanding our understanding of space, consciousness and matter in ways that bring Adamski's claims in this report into the realm of the possible.

The cover shown here is a later addition to the assembled report.

See also:
Ervin Laszlo Ph.D. (2017), The Intelligence of the Cosmos -Why Are We Here? New Answers from the Frontiers of Science
Harald Walach Ph.D. (2019), Beyond a Materialist World View - Towards an Expanded Science