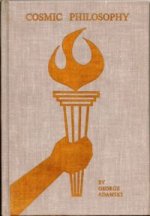 "Out of Cosmic Cause are worlds and planets whirled into existence; out of such formless beauty has evolved form upon form until at last there came one form so perfect in its geometric pattern that it possessed the possibilities of understanding Cause...
"Oh, Son of God and Son of Man, lift up all things within your sight; let your heart make known that which the sight doth not reveal and from the womb of Cosmic Cause which is the source of all creation awaken into the birth of a Magnificent Perception." (p.8)

Adamski's last book starts with a rousing 'Prelude' that relates the cosmic process of Creation and has the hallmarks of an exalted source. Titled 'The Magnificent Perception', it easily ranks among the most evocative texts in this library. Benjamin Creme confirms that it was inspired by the Venusian Master with Whom Adamski had a conversation on a mothership, as related in his book Inside the Space Ships (1955) (Share International No.8, October 2008, p.9). The chapters that follow are mostly texts that were originally written during the days of the Royal Order of Tibet in the 1930s, and also distributed among the members of the international Get Acquainted Program.
Benjamin Creme also confirmed that George Adamski was a soul from Venus who, like others, had come to Earth for a specific purpose (ibid). After his death on 23 April 1965 (St George's Day) the being who was Adamski contacted people on Earth on two occasions. The first occurred one day later, on 24 April 1965, and was described by Eileen Buckle in The Scoriton Mystery -- Did Adamski Return? (1967). The second occurred in 1980 in Italy, and was described by Giorgio Dibitonto in Angels in Starships (1983).

This volume includes a typed and photocopied slip with instructions by the author on how to benefit most from these teachings.

The first softcover edition was published in 1972, and another in 2017, while a spiral-bound reproduction is still available from the George Adamski Foundation.