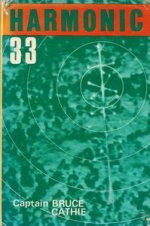 In the summer of 1952 airline pilot Bruce Cathie (1930-2013) and a number of his friends at the local aero club at Mangere, Auckland, New Zealand, spotted a brilliant white object and a smaller red light rotating around it, moving around in the sky, and after some 15 minutes the red light winked out and the white light increased in brilliance before it shot up vertically until it had disappeared. (p.15)
Applying his knowledge of navigation theory, he discovered a magnetic grid underlying UFO sightings and activity, and a distinct connection with nuclear explosions, which he documented in this, his first book. Captain Cathie's findings confirm Benjamin Creme's statements about the Space Brothers replicating the Earth's electromagnetic field: "What the Space People are doing in the crop circles in particular is recreating to a certain degree the 'grid' of our earth's magnetic field on the physical plane." (Maitreya's Mission, Vol.III, 1993)

In Chapter 8, 'Atomic Tests and the UFO Grid', the author mentions claims "that beneath the Potala [monastery in Lhasa, Tibet] there are miles of tunnels and catacombs within which are stored centuries of knowledge, and the past history of Man" (p.76) in what seems to be a reference to the secret chambers where the Masters of Wisdom safeguard the oldest records of Earth's history.

Chapter 16, 'Strange Things in the Solar System' references astronomers' descriptions of straight lines, domes and "more than 1,500 sights of lights" in and about the the dark areas of the moon" in the first half of the 19th (!) century (p149), as the precursors to the increasingly detailed anomalies that are recorded around the solar system by more advanced devices, such as the Solar and Heliospheric Observatory (SOHO) nearly two centuries later.
The author concludes this chapter saying: "... it is up to us to try and open our minds to the immensities of the future and to plan accordingly so that we are ready to participate in the new freedoms which true knowledge and understanding will bring. Already the signs are apparent and every day brings fresh evidence. Prejudice and disbelief belong to the dark ages; when we look to the skies we can already see a glimmer of the new dawn, and we must be certain that when the day arrives in all its glory, we are ready to accept the new challenge." (p.152)