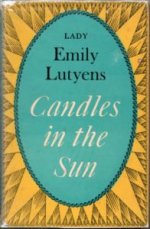 Affectionate description of an English lady's friendship with Krishnamurti from the time of his arrival in the UK at the age of 15, to her doubts and soul-searching after K dissolved the Order of the Star in the East.
Includes an Appendix entitled 'Brief Biographies of Leading Theosophists' and 10 b/w photographs, of the author, Annie Besant, C.W. Leadbeater, Krishnamurti, his brother Nityananda, and others.
On p.95 Lady Emily mentions the first public talk that Krishnamurti gave in 1921, which was published in Anne Besant (1922), Theosophy and World Problems.

Lady Emily (1874-1964), mother of K biographer Mary Lutyens, was the daughter of the former Viceroy of India Robert Bulwer-Lytton, and the wife of Edwin Lutyens, best known for his design of the city centre of New Delhi.

The US edition was published by the J.B. Lippincott Company (1957).