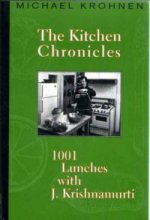 First-hand account of Krishnamurti's personal luncheon chef at Arya Vihari, Krishnamurti's Ojai Valley, California residence, in the form of narrative reconstructions based on the author's recollections and notes from the period 1975-1986.

"Rare humor and joke telling by one of the most serious minds of the century" and "A gem of narrative and lunch-table conversations with famous personalities." Includes twelve photographs of Krishnamurti with friends and associates at his California home that are published here for the first time.
Filled with jokes and anecdotes that Krishnamurti told over lunch, including the one he first told during his 1929 address in Ommen, the Netherlands, when he disbanded The Order of the Star in the East, about the devil who walks along the street with a companion while they see someone pick up a bit of the truth. "'That is a very bad business for you, then,' said his friend. 'Oh, not at all,' the devil replied, 'I am going to let him organize it.'" The history of this joke, which also occurs in Murdo MacDonald-Bayne (1946), I Am The Life, is documented in an endnote on page 301 in this book.