Krishnamurti – The Years of Awakening (1975) 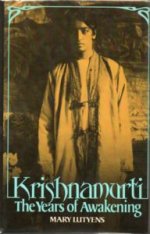 The first volume of what would become a biographical trilogy by the daughter of Lady Emily, who was the author of the first biography about Krishnamurti, Candles in the Sun, and Edwin Lutyens, the renowned architect who designed, among other things, the New Delhi city centre (i.e. Connaught Place).

Mary Lutyens (1908-1999), a 1.5 degree initiate, was acquainted with Krishnamurti from 1911 until his death in 1986. She was asked by K himself to write his biography and this first installment describes his life from 1895 to 1929, when he dissolved the Order of the Star of the East. She also edited a number of Krishnamurti's books published by Gollancz.
The author later also wrote a book about Krishnamurti's childhood, titled The Boy Krishna. The First Fourteen Years in the Life of J.Krishnamurti (Krishnamurti Foundation Trust, 1996) 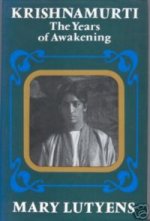