Krishnamurti – The Years of Fulfilment (1983) 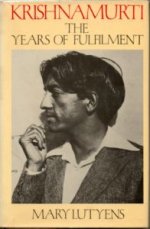 The second installment in Mary Lutyens' trilogy describes Krishnamurti's life from 1929 up to 1980. In this book, the author explores the question, "Who or what is Krishnamurti?" She thought that "K is being used and has been used since 1922 by something from outside," but that he is not a medium, since "K and whatever it is that manifests through him are for the most part one."
According to Benjamin Creme, Krishnamurti was almost constantly overshadowed by Maitreya, and it was His overshadowing of K that accounts for "the power" watching over him. (Share International No.9, November 1998, p.22-23) 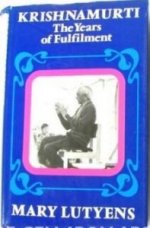