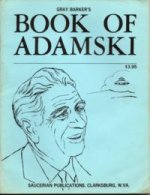 This tribute to George Adamski was compiled and published by Gray Barker, who has been described as "a master of the trickster kind" and perpetrated several hoaxes, including the infamous "R.E. Straith letter" with James E. Moseley (see below). However, it is of interest because it contains three texts by George Adamski himself, namely:

In addition, the book opens with tributes by long-standing Adamski associates Alice K. Wells, 'Go in Peace!', and Desmond Leslie, 'A Tribute to George Adamski' (reprinted from the July/August 1965 issue of Flying Saucer Review), in which Leslie relates the history of their co-authorship of Flying Saucers Have Landed (1953). It also contains two contributions supporting Adamski's claims, 'Adamski's Photo's Are Real' by Michael G. Mann, and 'Moon Probes Confirm Adamski's Claims', which is a reprint from a publication by New Zealand Scientific Space Research.
In the articles compiled in 'Space Age Philosophy' Adamski once more tries to focus his readers' attention on the teachings of the Space Brothers about the need for harmlessness and right relations, rather than on his contacts or people's desire for sensationalist details. In the article 'Positive and Negative Thinking' he shows the hallmark of a true initiate: "Serve as many as you can, the greater the number you serve, the greater will be the understanding of yourself. This reality should be the motive for everyone who desires to fulfill the destiny for which he was born." (p.50)
Finally, there are two contributions by Gray Barker. In the first, 'The Greatest Saucer Story Ever Told', he writes about his visit, in 1966, to Adamski's grave at Arlington National Cemetery among other things. In the second, 'The Strange Case of R.E. Straith', Barker denies any involvement with the letter that George Adamski received, in December 1957, from one R.E. Straith, purportedly a member of the Cultural Exchange Committee in the US Department of State, but in January 1985, a month after Barker died, Moseley confessed the hoax (see the link below). In Share International No.8, October 2008, Benjamin Creme confirms the letter was indeed a hoax (p.27).
Gray Barker also mentions his contacts with Ray A. Palmer, founder and editor of FATE magazine, and John Pitt, British publisher of the spiritualist magazine Psychic News, which published regularly about Dr Murdo MacDonald-Bayne in the 1930s.

No date. J. Gordon Melton and George M. Eberhart give 1966 in their extensive list of sources that appears as Chapter 10, "The Flying Saucer Contactee Movement, 1950-1994: A Bibliography", in the scholarly, though less than accurate or perceptive The Gods Have Landed. New Religions From Other Worlds (James R. Lewis ed., State University of New York Press, 1995).
Reprinted circa 1995 by Lizardhaven Press with a cream-coloured cover. Later reproductions (c2008) by others do not have a different colour cover, but can be distinguished from the original edition by the poor quality of the photographs. In 2014 a facsimile reprint was published by New Saucerian Press.

Gray Barker also published The Adamski Documents, Part One ([1980]), a 95-page collection of reproductions of correspondence between Adamski and others about his experiences with UFOs and their occupants.