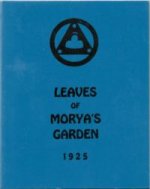 This is the first of the Agni Yoga volumes that was given mainly by the Master Morya, in co-operation with the Master Koot Hoomi. (Benjamin Creme (1986), Maitreya's Mission Vol.I, p.300-01.)
It is this volume where we find the statement "...by human feet and human hands the Temple will be built..." (p.76), which Benjamin Creme says refers to the New Age (The Art of Co-operation, p.185). This same section describes what Nicholas Roerich depicted in his painting 'The Signs of Christ'.
This is also the volume in which we find the original quotation which Benjamin Creme refers to when talking about the number of people Maitreya can count on (in Stanza 1): "Time was when even a hundred warriors were counted a host. Then a thousand were already an army. In time a hundred thousand conquered the world. Afterwards millions rose but they also did not alter the orbit of the spirit. And so I shall summon under the Banner of Spirit one billion. This will be the sign of My army."
Benjamin Creme adds: "My Master says that there are now [Jan/Feb 1989] about 1.5 billion people ready, conscious, available to the Christ as a vanguard through whom He can work to change the world." (Maitreya's Mission, Vol.II, p.254)