Telepathy - The Cosmic or Universal Language (1958) 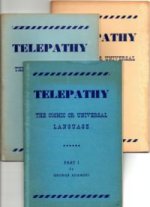 Course in Telepathy in three volumes (31, 32 and 42 pages, respectively). In Inside the Space Ships (p.101) Adamski's extraterrestrial contacts told him that his knowledge of telepathy was adequate: "This was proven in the final test at our first meeting."
In Cosmic Science, in his answer to Question #36 the author writes about his course on telepathy which he was then preparing, explaining that, "This will not be the normally accepted teachings on telepathy, but will explain what a person is, how he operates, and his purpose for being."
Each volume deals with one of the three major influences on the average person: the four senses (vol.1), the emotions (vol.2), and the ego (vol.3). By becoming aware of these influences, man will regain control of the tools for what the author calls "the natural ability inherent in all forms of life to communicate their feelings to all other forms." (From the Forward to vol.1)
The author makes several references to the teachings of Universal Law as described in Inside the Space Ships.

The course is still available from the George Adamski Foundation.

See also:
Alice A. Bailey (1950), Telepathy and the Etheric Vehicle