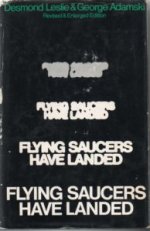 For the revised and enlarged edition of this classic of UFO literature, Desmond Leslie added a Part Three with a lengthy "Commentary on George Adamski", in which he defends his co-author's character and sincerity against the general vilification that had already begun when Adamski was still alive: "Of all the contactees, Adamski attracted the most controversy and odium; and none but a man of his strength of character could have survived the onslaught..." (p.262)
After providing ample arguments in support of Adamski's claims and explanations for the seeming contradictions to the physical reality of our world, Leslie concludes: "I have never seen or been inside a scout ship, never knowingly encountered a Visitor, but somewhere in the silence of my being is a knowledge, no greater than a grain of mustard seed, that knows without any explanation or apology, that these things are true; and that untruth is merely our inability to perceive and understand." (p.272)

On p.83 (p.84 in the original 1953 edition) Leslie describes an encounter with the proprietor of a bookshop in Museum Street, London, which he felt the urge to enter while on his way to the British Museum to research his book. The shop owner said: "I have a book I think will interest you," (The Children of Mu by James Churchward) in which aerial craft is described that were used during Atlantean days. The shop owner "was a strange man, with the most penetrating eyes I have ever seen; eyes that seemed to reach in and examine one's innermost thoughts and to smile at what they saw." Benjamin Creme has confirmed it was a "familiar" used by Maitreya (Share International No.6, July/August 2005, p.37).

This edition also contains a Postscript about "the secret of UFO propulsion", which Leslie omitted from the original edition, but now says "could possibly be defined as the primordial power behind solar, electrical and atomic energy, which are only material manifestations of this ultimate pristine energy." (p.273.) (Cf the descriptions of the Technology of Light in Benjamin Creme's writings.)

This edition contains many additional photographs that were not included in the original edition. It was reprinted twice, in 1972 and 1976. A paperback reprint of this edition was published in 1977 by Futura (UK).