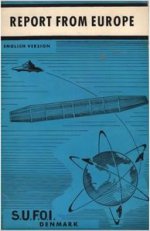 Transcripts of the lectures given by Prof. Marcel F. Homet and George Adamski at the SUFOI Congress on 5 May 1963 in Copenhagen, Denmark. This volume also contains biographies of both speakers, plus background information on George Adamski, as well as transcripts of his question-and-answer sessions in Copenhagen and Antwerp, Belgium. In addition to the transcripts, it also has several chapters providing guidance on navigating the scepticism of the media and the gullibility of the general public.

Major Petersen's parting words sound as if they were written for our time: "And so you are alone -- perhaps treading your own lonely path -- in a world where contrasts meet more sharply than ever before. The masses drift hither and thither without plan, just following the doctrinal streams which the world's leaders spread through the newspapers, radio and television. Depression is great, as never before -- murder, violence, crime, accident, swindle, sickness and stress, all to an extent so great that one cannot think that it could be worse.
"But the plan -- which follows with the presence of the flying saucers in our atmosphere and the space people's work among us -- will soon begin to be seen. When that happens a great many things will be changed; and then the pace will quicken. Progress will roll in over us, and the law of cause and effect will adjust the balance and equilibrium in our world." (p.191)

The editor, Hans C. Petersen (1924-2013), a former Major in the Danish Airforce, was George Adamski's co-worker in Denmark from 1957, when he founded the Scandinavian UFO organisation SUFOI. After falling out with SUFOI in 1965, he set up the International Get Acquainted Program (IGAP) with Ronald Caswell in the UK to continue his work in support of Adamski's mission. Together they edited UFO Contact - IGAP Journal from 1966-1968. Major Petersen also published IGAP newsletters in Danish (Kosmisk Nyhedsbrev, 1988-1996; and IGAP Nyhedsbrev from 1997-1999).